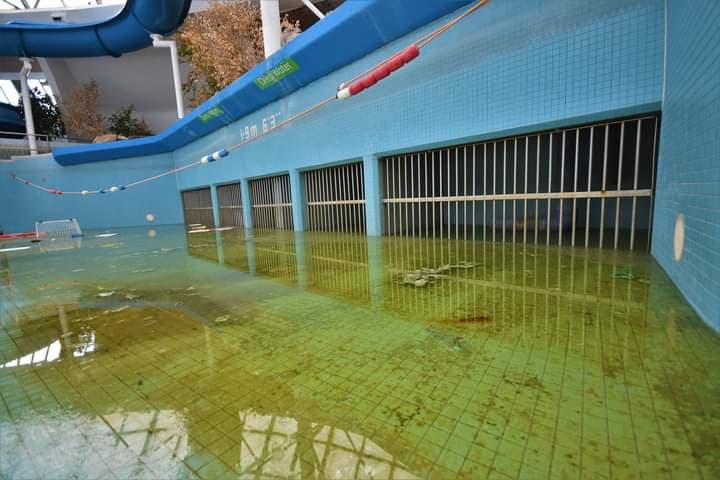 A Stitch in Time Saves Nine – The Oasis Needs Maintenance

This week, (week commencing 13th June 2022) SevenCapital (Oasis leaseholders), Historic England and the Twentieth Century Society are set to meet to discuss next steps with the Oasis, following its listing at the back end of last year.

This is a start. This is a positive step. But let’s be under no illusion that there’s not a long way to go. The road from this point to firing up the wave machine is going to be a long and, no doubt, bumpy one.

Those bumps would have been fewer in number had SBC maintained the building well while they still held the keys to it. And, once said keys were handed to SevenCapital in a Faustian pact of a lease, had they held 7C to account over the conditions of their lease. In the first instance while 7C were still operating it and, in the second, since they closed it. But, for reasons known only to themselves, that hasn’t happened. As a result, the Oasis has had no maintenance from that day to this.

Worse – neither GLL nor SevenCapital perfomed a proper shut-down. Thus, chemicals were left lying around, plants left to die, water left to go manky and mouldy, etc. etc. That situation has been allowed to continue and we can call that nothing aside from constructive vandalism.

So! While the news of this meeting is one to greet with cautious optimism, we must bear in mind that no-one is doing any basic maintenance on our beloved Oasis. Given that any getting-it-reopened process will take time it’s ABSOLUTELY VITAL that someone – I don’t even care who – gets in there and cleans it up. And then keeps it that way!

SevenCapital claim to have spent hundreds of thousands of pounds on the Oasis. On what I am not sure – all the needless tree chopping springs to mind. But whatever it is – it’s not been on clearing up this mess.

Black mould is growing on the walls, there are pool chemicals in the plant room – it’s a mess. And it’s been left that way despite the protestations of the campaign.

They – 7C – were happy enough to take the lease to get the site to build lots of houses. Straying into supposition territory, it’s possible that they assumed/had been told that the Oasis dome was coming to the end of its life. No wonder they took the 99-year-sans-take-back-clause lease eh? More space for more houses.

We’re all of us, except it appears, SBC, familiar with the aphorism about a stitch in time saving nine. As pointed out above, that most sensible philosophy has not been applied to the Oasis. But it’s not alone in that is it? There’s a long list, is there not, of buildings/structures/public art and so on that have been so sorely neglected? In no particular order I give you:

And yes! I KNOW. SBC do not own either the Locarno or the Mechanics’. Even so …! I’ll leave you with this.

A few years ago now, the now deceased Swindon author Mark Childs, wrote in his publication, The Swindon Book:

‘Situated in Emlyn Square, the Mechanics’ Institution building, more widely called the Mechanics’ Institute, has become, since the mid-1980s, the embodiment of the kind of obfuscation, nimbyism, small-mindedness and muddled thinking that generally have stopped Swindon from elevating and successfully regenerating itself.’

Mark was writing there about the Mechanics’. But you could delete Mechanics’ and insert any of those things listed above and it would still make sense.

It’s not what you’d call edifying is it?

A reminder: it’s now a whole DECADE since SBC handed over the Oasis site to developers.