In Xanadu did Kubla Khan
A stately pleasure-dome decree:
Where Alph, the sacred river, ran
Through caverns measureless to man
Down to a sunless sea.

First billed as a lagoondome, the early 1970s saw The Oasis mushroom out of the ashes of British Rail’s Shop 16. Barry Leighton., then of the Swindon Advertiser wrote of it:

‘In the glum, economically testing times of the early Seventies it seemed like a dream. A ray of extravagant, faraway sunshine that had contrived to pierce a doom-clouded era of strikes, the oil crisis and a three-day week to illuminate an unlikely corner of North Wiltshire.’  He then went on to describe how the bulbous, £170,000, see-through glazed centrepiece of the three-storey play Mecca that came from the USA – was lauded as ‘the biggest leisure dome in Europe.’

The Oasis had its official opening on New Year’s Day, 1976. The then mayor, John Stevens, performed the official ceremony. On hearing the news about the SOS campaign he sent this message:

‘‘I had the pleasure and privilege of opening the Oasis, on New Year’s Day 1976, but never thought that I would see the day it could be closed – a very sad day indeed.

It was back in 1968 when the Borough Council discussed that, with the rapid expansion of the Town and the surrounding areas, we consider the building of a state-of-the-art leisure centre.

I had the good fortune of being on the Arts and Recreation Committee where we discussed and debated as to whether we could afford this kind of building and design.

We were aware that we were opening a very fine building, one of the best in the country, with this type of pleasure dome and provide the finest leisure activities in the country. Despite the financial restraints of the times we were committed to the people of Swindon and the surrounding area, to provide a fine and exciting building for the use and enjoyment of the community.

Let us not lose what was achieved for the people of Swindon, which is still enjoyed today by many of our residents, who look to the opportunities to keep fit and also relax. ‘

In 1976 the American National Swimming Pool Institute awarded the Oasis an Oscar of the swimming pool world. They bestowed a gold medal on it and hailed it as the world’s top residential pool of 1976! Wow!

What’s more, following the later addition of the domebuster water chutes the Oasis became, for a while, Wiltshire’s biggest attraction! Yep – as Barry Leighton exclaimed: Bigger than Stonehenge!

‘ … the Oasis is the most innovative of 20th-century public structures offered in the town AND county. The dome part of the building was the 3rd of its kind built in the UK and at the time was the largest dome in Europe.

Regardless of architectural significance, the leisure centre’s cultural significance is big. It represents everything about this period in Britain, at a time when Swindon was a key player in providing overspill space for London. These new-town communities were attractive prospects for new families. In 1974, the build of the Oasis was slap-bang between the 50s/ 60s expansion to the east of the town and the 70s/80s expansion to the west.

Committed supporters of the SOS campaign, the Twentieth Century Society on their 2021 buildings at risk list describe the Oasis thus:

‘ … It is the last major work of architectural partnership of Gillinson Barnett and Partners (GBP), where Peter Sargent and Clifford Barnett were senior partners, the pre-eminent designers of leisure centres during this period.  At Swindon a large free form pool was enclosed by a 45-metre dome (the largest of its type in Europe) composed of an aluminium frame with transparent PVC panels.

And further, the RIBA Guides to Modern Architecture described it as a ‘fantasy structure, its half-submerged dome resembling a flying-saucer.’

The last of a typology

*It also happens to be the best example that embodies the aims of the originators and is unique in its form.

Guy himself visited the Oasis in 1978 as an undergraduate. A visit that set him off on his own career in leisure architecture. He went on to design Coral Reef at Bracknell.

Mr Guy tells too of how the dome is a feature of the design and forerunner of buildings such as The Great Glass House at the National Botanical Garden of Wales in Carmarthenshire, Wales by Foster Associates. And that It also fits into a much larger context of historic domed buildings including the Leeds Corn Exchange, The Devonshire Dome, now at the University of Derby at Buxton and the Royal Albert Hall.

Read Robert’s article for the Architect’s Journal about the Oasis here: ‘Loss of a typology’: campaigners call for listing of Swindon leisure centre’

The image below shows plans for the Oasis Domebuster slides circa 1986. Note the diving pool was later removed. 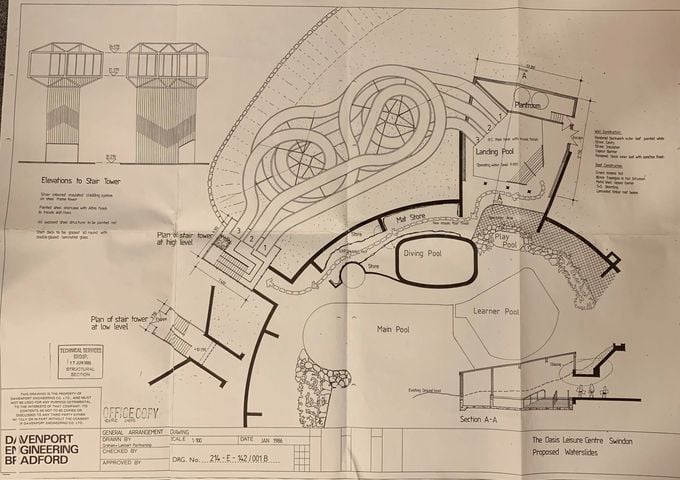 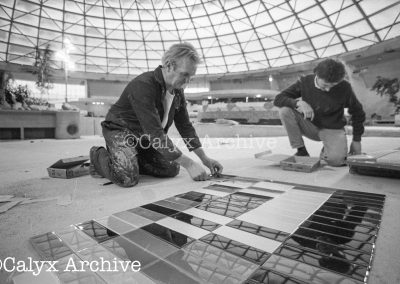 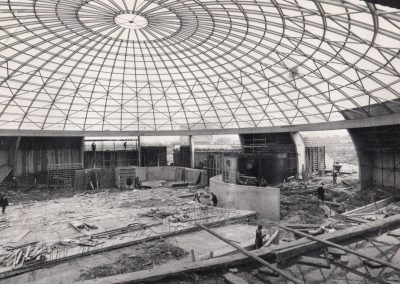 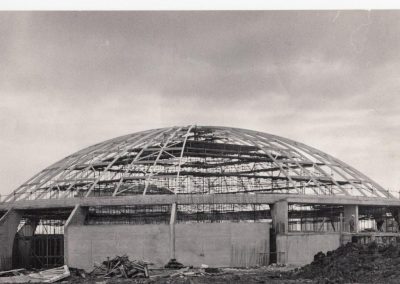 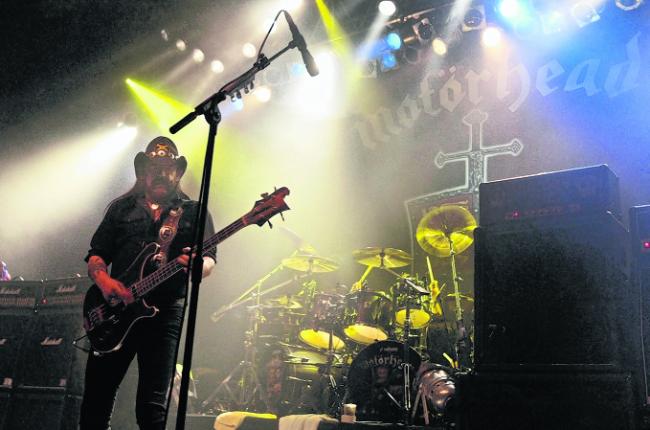 The first thing you think of, at mention of the Swindon Oasis, is the leisure pool with the wave machine along with the domebusters and the beach style ambience. But the place always had a lot more to offer.

We have been emphasising the Oasis’ position as a tourist destination because of the rich history it has.

Indeed, as you can see from some of Ken White’s Oasis Posters, many events took place throughout the 70s and 80s from flower shows to gymnastics competitions. Members of the SOS campaign have fond memories of going to the Oasis to see the latest technology in the 1990s, during the regular computer fairs that were hosted there.

The Oasis as a music venue

Yet this website must give some focus to the Oasis as a music venue. The amount of artists who have played there is mind boggling – some of whom are no longer with us.

We haven’t been able to definitively work out which artist played there first, but you’d be absolutely blown away to see the full list.

It’s so difficult to establish a music venue yet alone to get the stars to actually want to play at it, but the Oasis had the charm, the size and the scale to attract some of the worlds biggest artists, attracting people from miles around!

Also many comedians such as Jimmy Carr, John Bishop and Jason Manford. 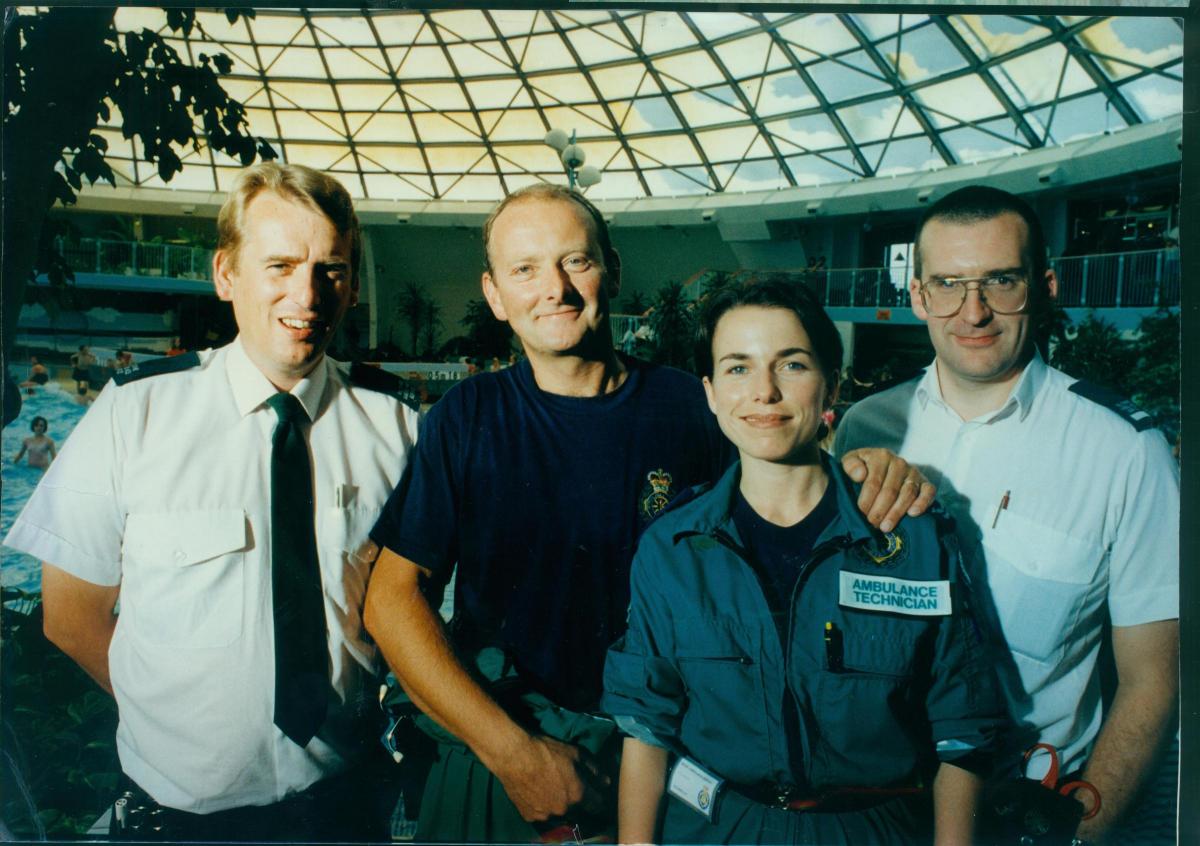 Back in 1994, the Oasis Leisure Centre was used to film an episode of the popular TV drama ‘Casualty’. The episode was shown on TV, and the Swindon Advertiser were able to take this great photo of some of the cast members. 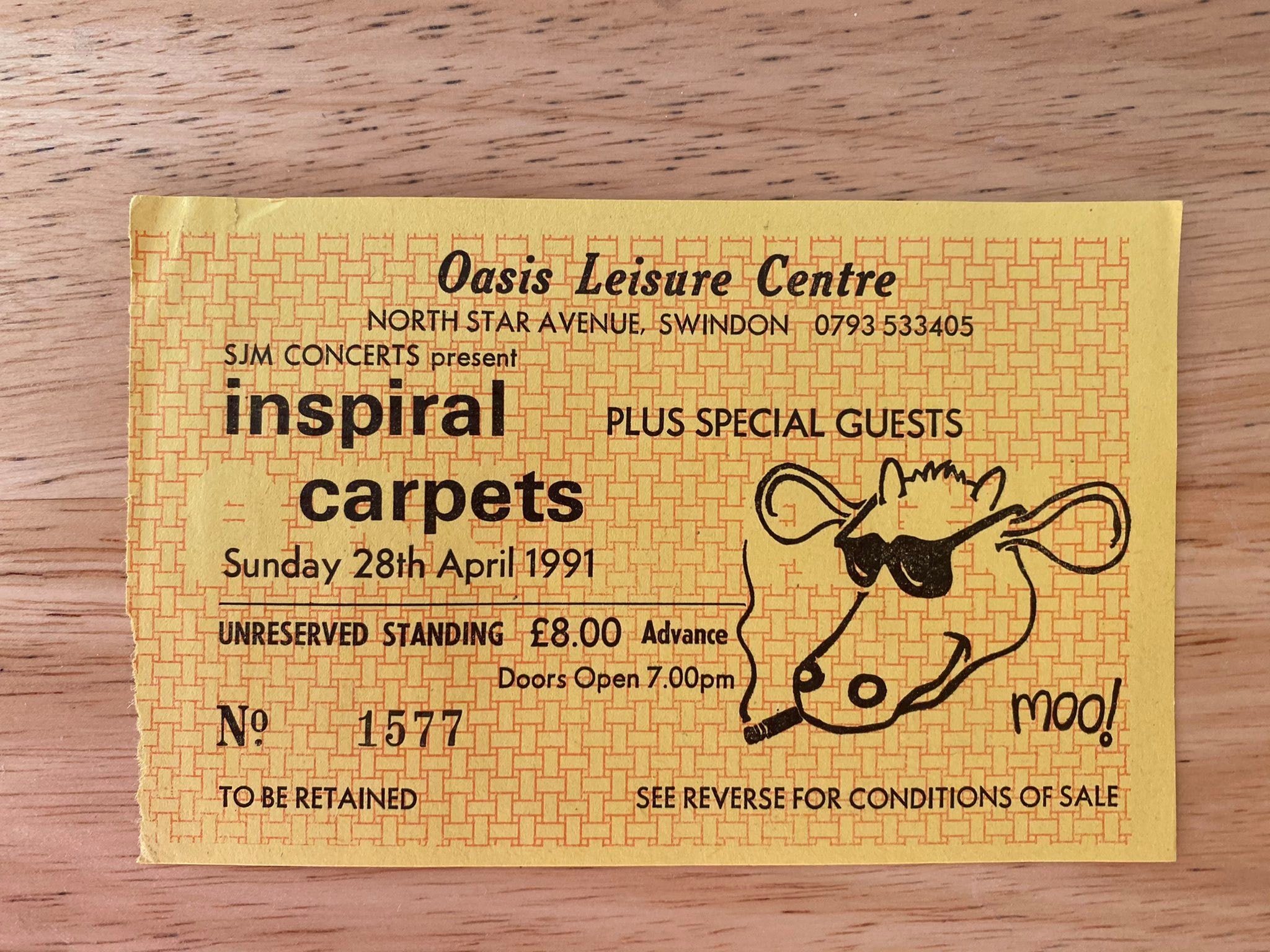 There is a 1990s Britpop story that goes like this:
Back in 1991, one Noel Gallagher visited Swindon as a roadie for Indie band Inspiral Carpets playing at Swindon’s Oasis leisure centre.

Brother Liam, along for the gig, was drawn to the name Oasis as a new name for their band – then called The Rain. Though not at first enamoured with the idea, Noel came round and Oasis they became. 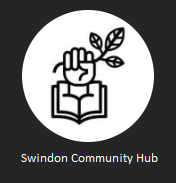 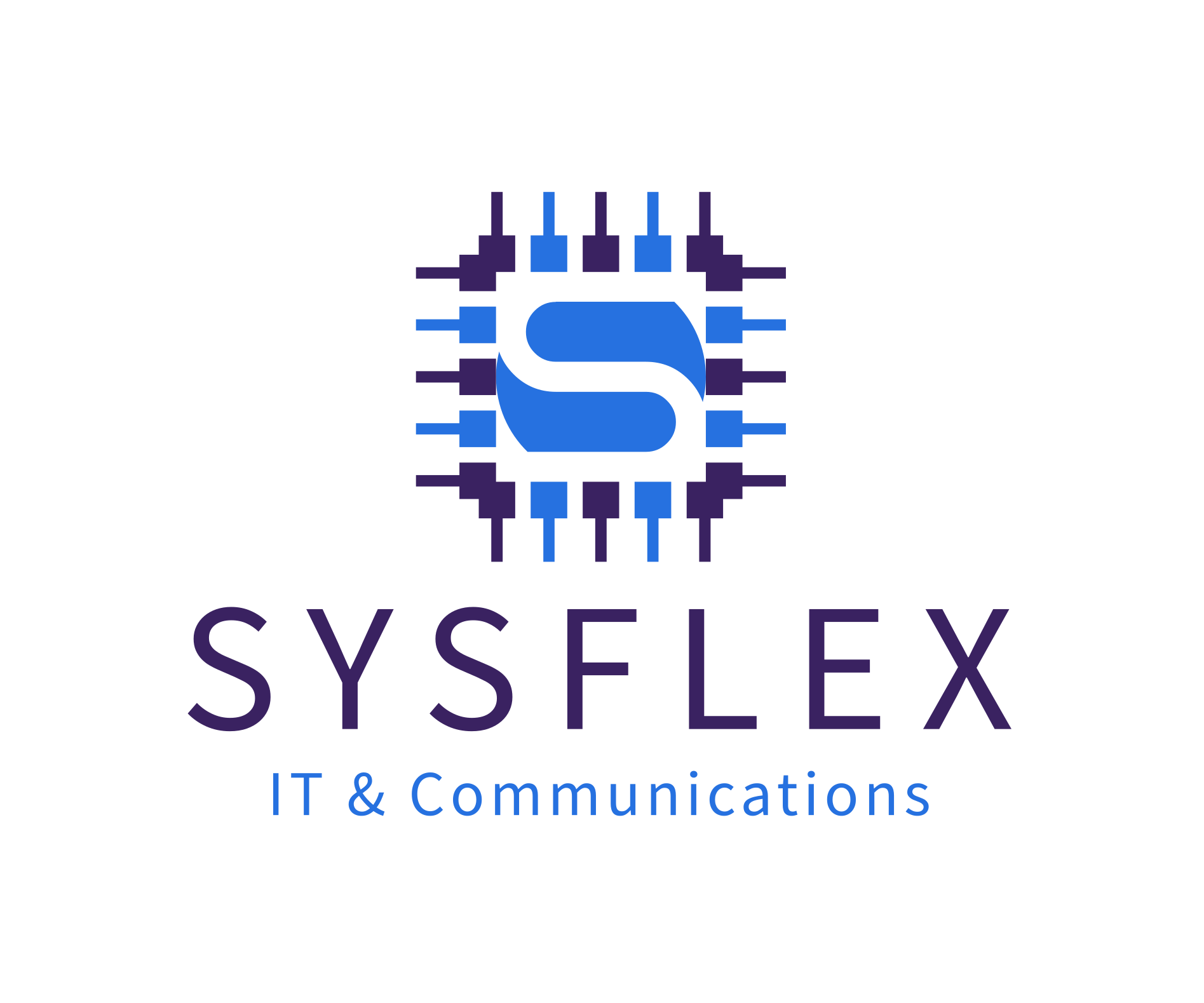